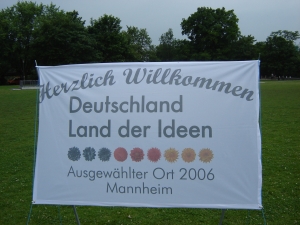 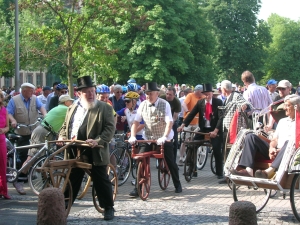 Velocipedists on rebuilt historic vehicles, headed by the Vice World Champion in hobbyhorse riding Walter Werner from Austria, and newly made vehicles, built by the carpenter guild of Mannheim, historic bicycles as well as Rikschas, 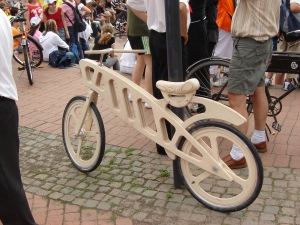 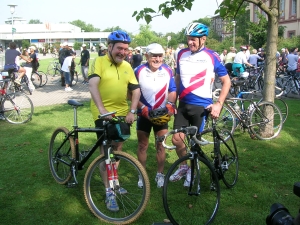 a brand-new "conference-bike" for a driver and 6 participents were riding the historic way of the first ride from Mannheim castle to the Drais memorial, close to the former mail station Schwetzinger Relaishaus. Returning to town, a rebuilt of the original Benz motorcar did join the parade and did remember on Berta Benz' return from the first over-land tour from Mannheim to Pforzheim. 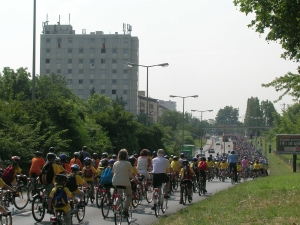 The initiative Local Agenda 21 Mannheim-Neckarau e.V. and ADFC section Mannheim (ADFC = Overall German Cyclist Club) had invited schools situated in Mannheim and in the Rhein-Neckar area, if they were bearing Karl Drais or Carl Benz in their names to join the parade. Far more than 1300 pupils from Mannheim, Ladenburg and Karlsruhe were announced to participate. Many other persons did show up also, the Mannheim police was reporting about 2000 participents in total.

The Goethe-Institut Mannheim-Heidelberg submitting already the biography of Carl Drais in many languages such as French, Spanish, Thai and Japanese did join the parade also, being equipped with bicycles by  Biotopia Fahrradstation or being carried by Rikscha-Service Rhein-Neckar. 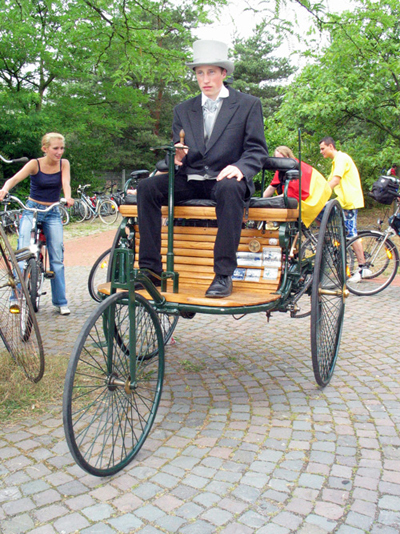 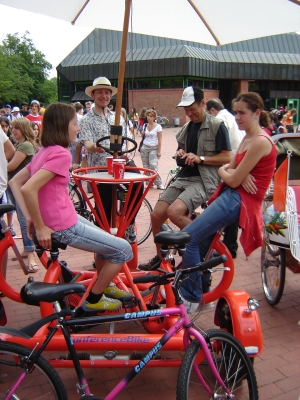 Rudolf Höcker (head of committee), Paul Buchert (member of Mannheim city parliament) and the Lord Major of Mannheim Gerhard Widder, participating together with his deputies Mechthild Fürst-Diery, Dr. Peter Kurz, Lothar Quast and Christian Specht, did welcome in the yard of Konrad-Duden-Schule many prominent guests: former federal trainer of cyclists Karl Ziegler, the cyclist racing legend Willi Altig, the head of US army in Mannheim Melissa Sturgeon, the deputy head of University of Mannheim Prof. Dr. Martin Schader, the head of Goethe-Institut Dr. Barbara Malchow-Tayebi, several members of city parliament and Klaus-Peter Wunderlich, head of  Deutschen Bank in Mannheim presenting the trophy given by the Initiative „Germany – Land of Ideas“. Songs being presented by chorus of Pfingstbergschule conducted by Esther Fröhlich. 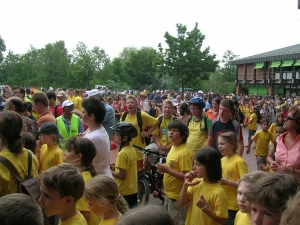 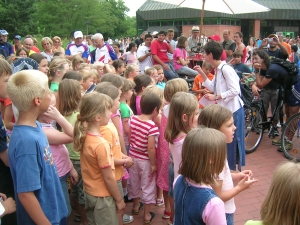 Having far more participents showing up in the morning than being announced, the drinks and Pretzel handed out at the break became short. Little number of broken bicycles did enable the mobile bike repair team by Neckarauer Radsporthauses Schmidt and the bus collecting the "bikeless" or exhausted sponsored by  Carsharing organisation Stadtmobil Rhein-Neckar AG to provide each help being required. A relaxed morning was enjoyed also by the emmergency service of Arbeiter Samariter Bund and  Johanniter Unfall Hilfe, since no one was hurt.

Even the push given by a non-participating motorcar to a guarding police motorbike was not too serious. Last, not least a very special help was offered by the head of police guarding the parade. A well decorated hobby-horse did loose it's bell, the rip being broken. Commenting whilst driving in a car, the shoe would fit anyhow, police officer Klaus Wiedeholt did present one of his shoe-lace for an immediate repair. 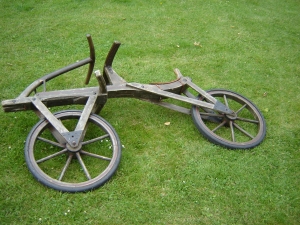 We wish to thank all participents, who joining the parade gave their respect to  Karl Drais and Carl Benz !

back to Germany - land of ideas